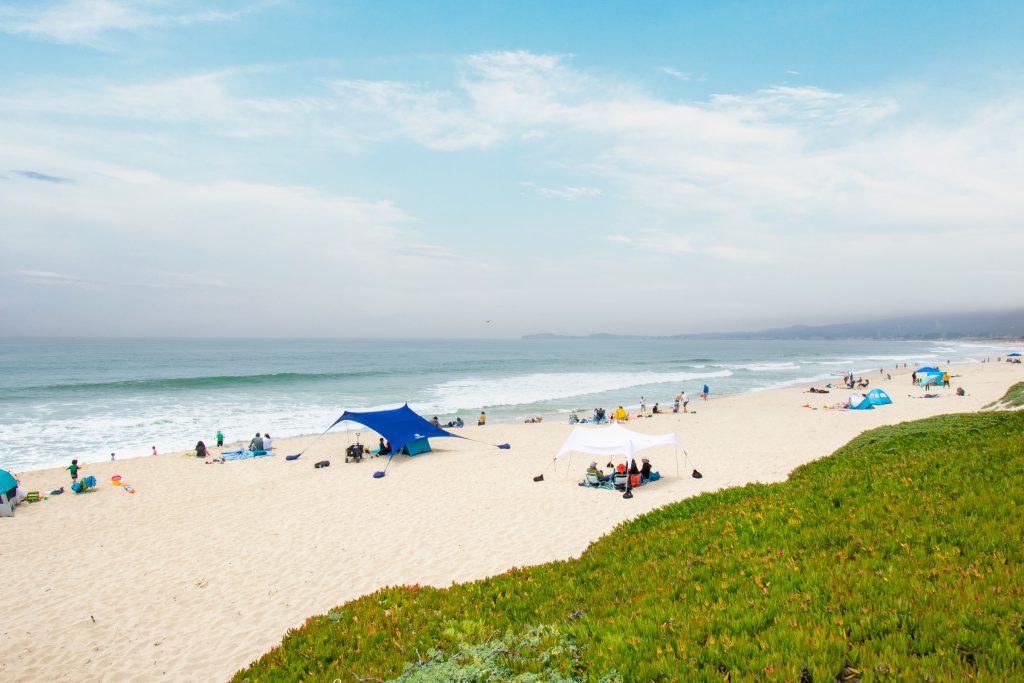 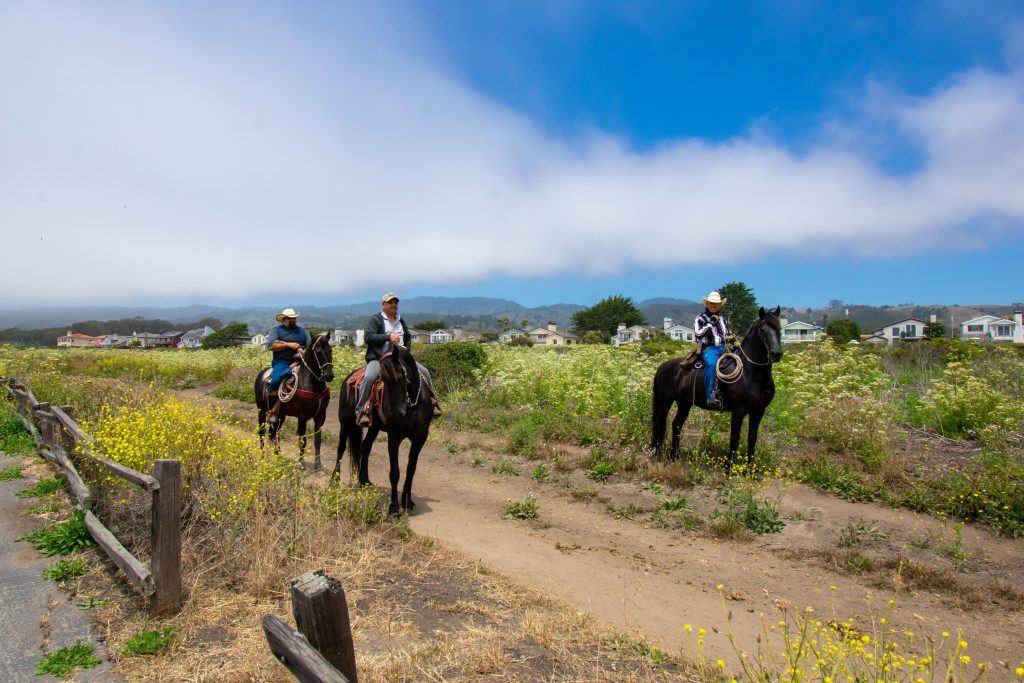 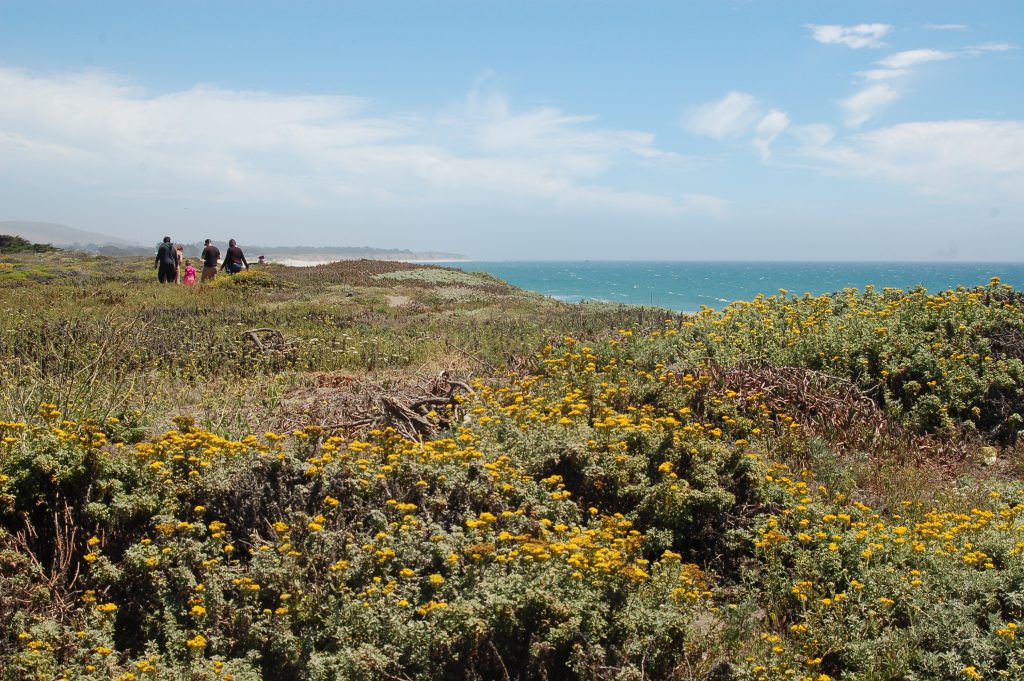 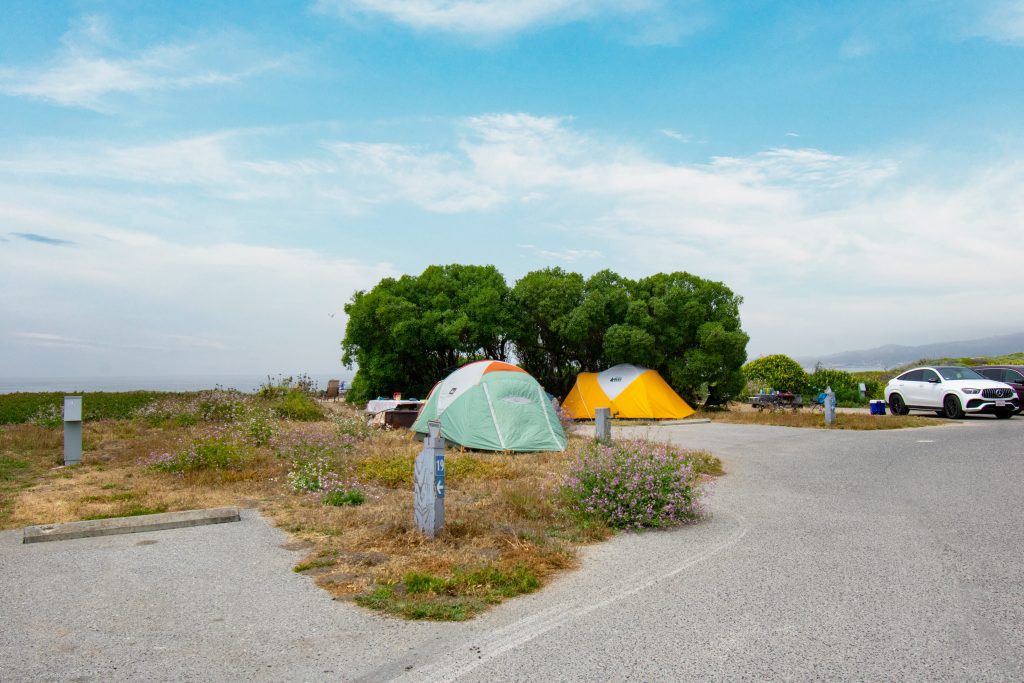 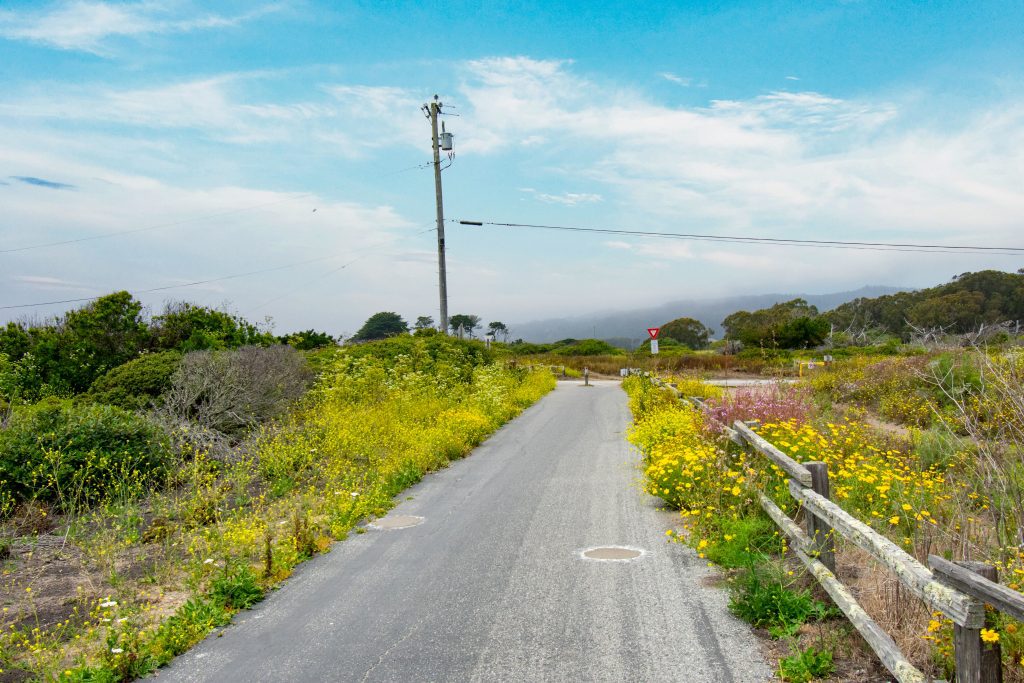 Half Moon Bay is ideal for sunbathing, picnics, surfing, fishing and also has a campground for those who wish to visit longer.

Surfs up! The water is a very cold 50-60’F and is a popular surfing spot! Keep a close eye on the weather before making the trek over to this beach — temperatures can reach closer to 60 degrees with high surf even on a sunny summer day!

Francis Beach has a visitor’s center, picnic tables and bathrooms. There also is a 52-spot campground. North from Francis Beach, you can take the paved pedway along the bluff — a perfect hiking spot!

Venice Beach is the next beach north of Francis Beach; it can be found at the western end of Venice Boulevard off of Highway 1. This beach has picnic tables, outdoor showers and a bathroom.

Dunes Beach is north of Venice Beach, also known as Naples Beach, this beach is reachable from Highway 1 via Young Avenue. This beach has bathrooms and parking here is usually easier to come by.

Roosevelt Beach is the northernmost beach at Half Moon Bay. The Half Moon Bay Coastal Trail is behind the parking lot and heads north to Pillar Point, site of the famous Mavericks surf competition, and south along the entire length of the state beach.

The beach is located a half-mile west of Highway 1 on Kelly Avenue in Half Moon Bay. There are multiple parking and beach access points:

By Bus: Take samTrans route 17 to get to the beach.

Swimming is not recommended here because of extremely cold water temperatures and unpredictable rip currents. Surfing conditions here are nearly impossible to forecast because of the unpredictable weather and surf action.

From late spring through summer, Half Moon Bay is noted for good runs of surf smelt. Anglers use throw nets and are known to bring along great to catch the striped bass that sometimes follow the smelt.

Coastside Trail runs along the eastern boundary of the four beaches providing close to a three-mile stretch to walk, jog or ride bikes. The trail continues north to Pillar Point Harbor.

A horse trail parallels Coastside Trail from Roosevelt Beach to Francis Beach. While in the state parks, horses are restricted to the designated horse trail and are not permitted on State Beaches.

The Half Moon Bay State Beach Visitor Center is open Saturdays and Sundays. Come on in and learn about the exciting world of the beach and experience the cultural history of the Coastside.

Parking is $10 and supports the park. Credit card payments are encouraged.

Annual State Parks passes also are available to purchase at the entrance kiosk.

Francis Beach has a campground with 52 individual sites, some suitable for tent camping, others for trailers or recreational vehicles. Although hookups are not available, there is a dump station. Coin-operated hot showers are also available (2 minutes per quarter).

Half Moon Bay State Beach Campground is now on the reservation system. Campsite reservations must be made through ReserveCalifornia, 1-800-444-PARK (7275) or online.

Maximum length for trailers, campers and motorhomes is 40 feet.

There are several ways to get involved at Half Moon Bay State Beach.

Half Moon Bay State Beach is in the unceded homelands of the Ramaytush-speaking Ohlone Tribe known as the Chiguan, who stewarded these lands since time immemorial. Centuries of colonial violence led to the removal and displacement of the Chiguan. Today, their descendants continue their stewardship and presence here, in partnership with State Parks.

By the time Europeans arrived here, this area had been occupied for thousands of years by as many as 50 separate and politically autonomous native groups known as the Ohlone. Each group had its own leader, customs and territory, though some smaller groups were connected by shared boundaries, intertribal marriage and similarities of language. In the mid-1700s, Spanish missionaries arrived and drew the native people into the mission system. The decline in the Ohlone way of life began with the loss of their lands and grew rapidly with the introduction of European diseases.

When the gold rush brought immigrants from Mexico and Chile to the area, the area earned the nickname “Spanishtown.” Its remarkable diversity began during the late 1800s, when groups arrived from Canada, Italy, Germany, Ireland, China, England, Portugal, Scotland and the Pacific Islands. The first official mention of Half Moon Bay is on an 1854 Coast Survey sketch of Spanishtown. Before Highway 1 was built, Prohibition (1920 to 1933) had caused a proliferation of speakeasies along the coast. This area’s hidden coves and thick fog made it perfect for the eagerly awaited ships of Canadian rumrunners to unload their illegal whiskey onto smaller boats headed north to San Francisco.

Cowell Ranch State Beach, the southernmost unit of  Half Moon Bay State Beach, was opened to the public in 1995. The ranch has been farmed since the mid-1800s, first by a 16-year-old immigrant from Germany, but later by Henry Cowell who acquired the property due to foreclosure. When the Cowell Foundation decided to sell the ranch in 1986, it was purchased by the Peninsula Open Space Trust (POST), a nonprofit land trust serving San Mateo and Santa Clara counties. To assure permanent protection for this land, POST sold conservation easements—permanent deed restrictions, which include the development rights on the property—to the California State Coastal Conservancy. POST also donated beach access to the State of California, providing a unique agricultural view trail to the new Cowell Beach. After protecting the land and assuring recreational opportunities, POST sold the ranch to local farmers. Learn more about Cowell Ranch State Beach here. 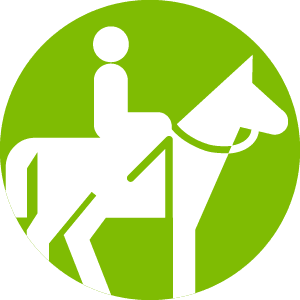