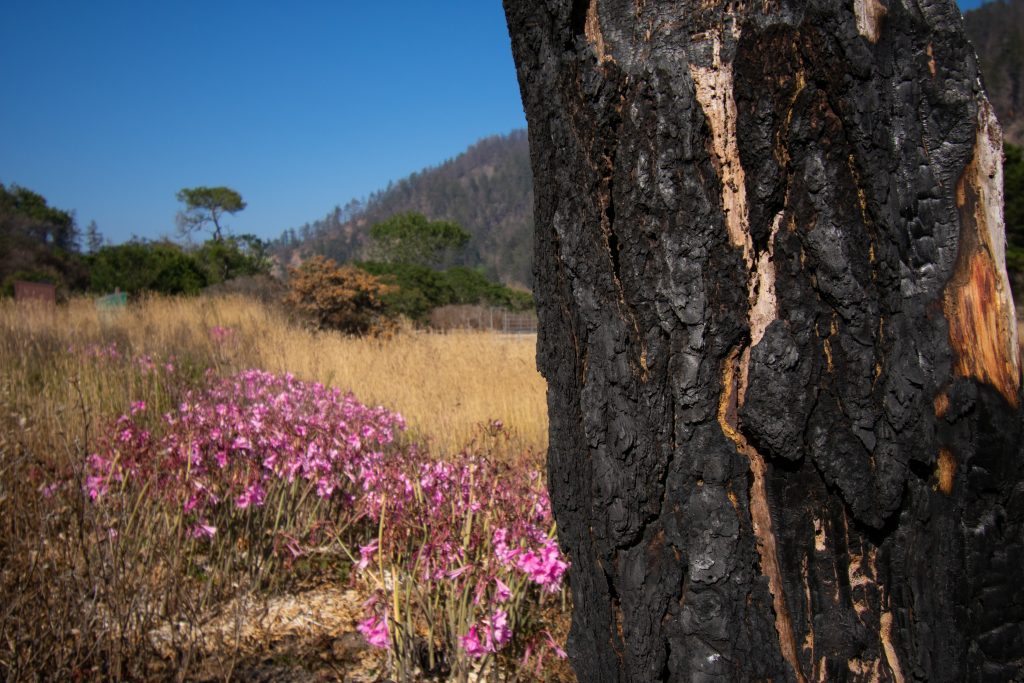 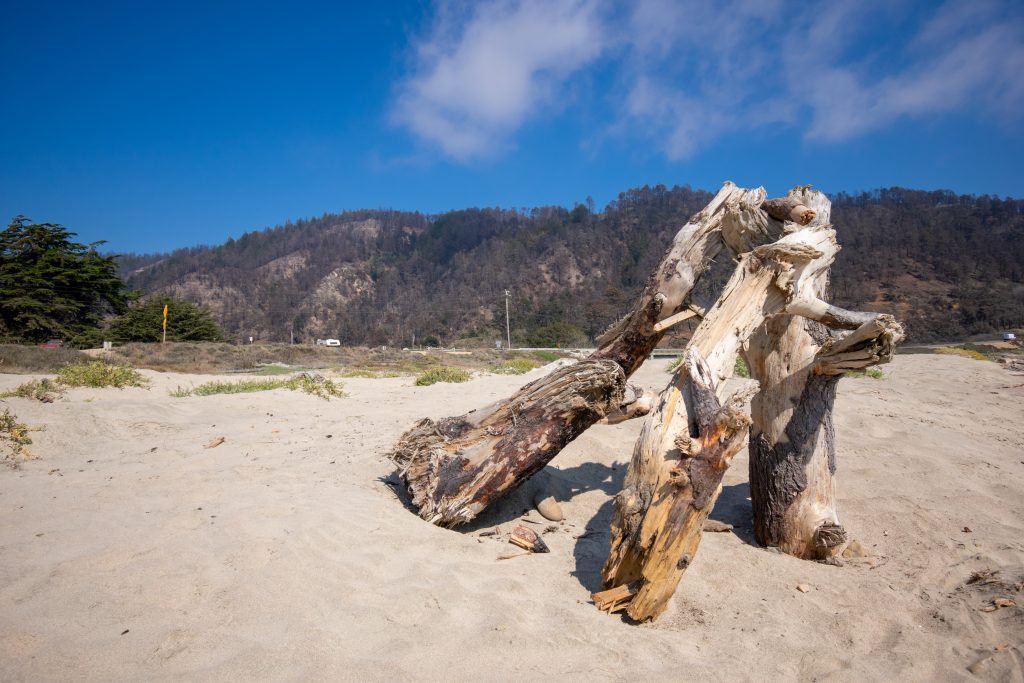 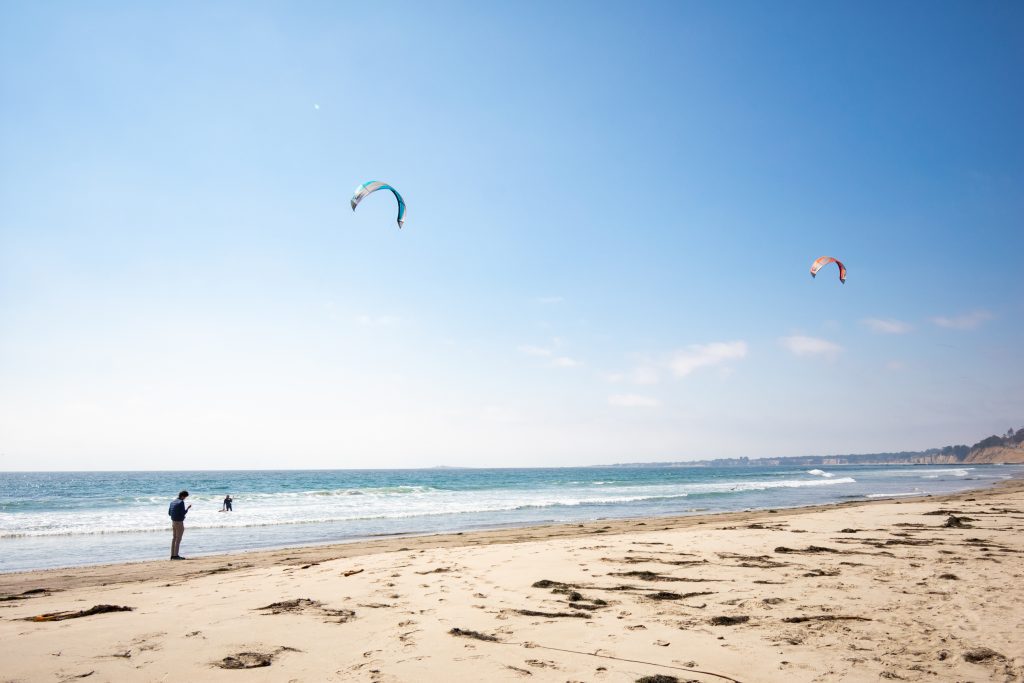 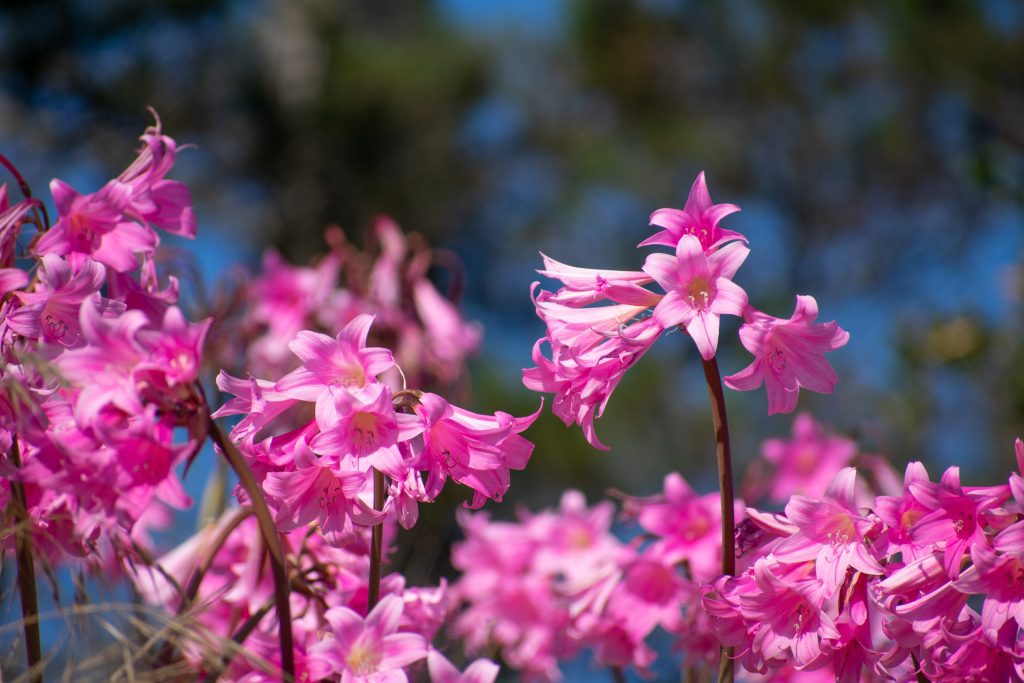 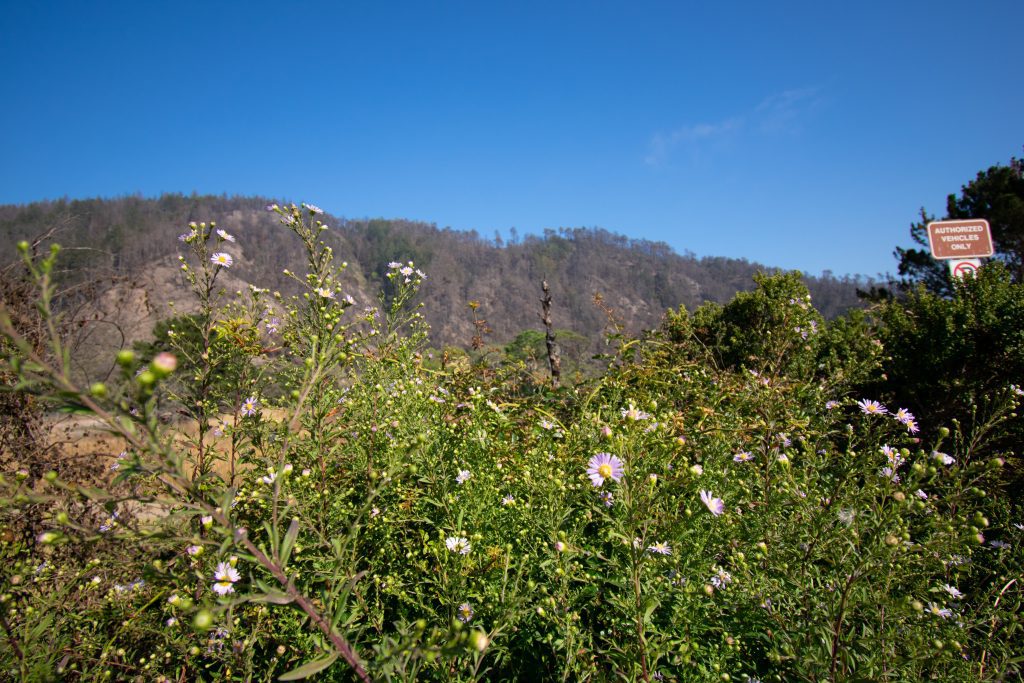 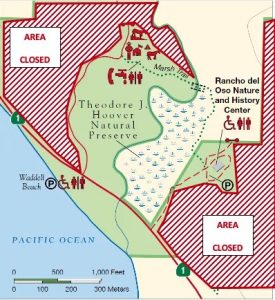 Update: Waddell Beach parking lot is open. Rancho del Oso is partially open: the west side is open from the yellow gate to the Horse Camp parking lot, along with the Marsh Trail from there to the creek;  the east side access to the Nature Center is closed due to the dirt road and parking lot conditions.

Rancho del Oso is the ocean end of Big Basin Redwoods State Park. Prior to the CZU Lightning Complex Fires, the park offered a variety of recreational opportunities, including hiking, biking and horseback riding. The majority of these trails and activities remain inaccessible due to fire damage.

Waddell Beach, located across Highway 1 from the park entrance, is known worldwide as one of the spots for windsurfing and kite surfing. The steady strong northwest winds and good surf provide ideal conditions for this demanding sport.

Learn more in the California State Parks brochure (note, the brochure is not up-to-date with fire impacts).

Drive north from Santa Cruz on Hwy 1 for 17 miles to the Waddell Creek Bridge. Parking is available on both sides of the highway.

Launching from the tops of incoming waves the best windsurfers can complete full loops and continue on their way. With the strong winds and occasionally heavy surf, Waddell Beach is not recommended for novice wind surfers. Regular surfers and boogie boarders also find it an ideal spot to pursue their activities.

The Theodore J. Hoover Natural Preserve is great for birders. The Marsh Trail is teeming with life. Rabbits are frequently seen scurrying off the trail, while dragonflies swoop over the water, and birds flit among the willows growing near the creek. Due to the abundance of water, flowering plants have an especially long season here.

Rancho del Oso, a unit of Big Basin State Park, is in the unceded homelands of the Awaswas-speaking Ohlone Tribe known as the Cotoni and Quiroste, who stewarded these lands since time immemorial. Centuries of colonial violence led to the removal and displacement of the Cotoni and Quiroste. Today, their descendants continue their stewardship and presence here, in partnership with State Parks.

Rancho del Oso is a site rich in cultural and natural history. The area was frequented by Native Americans (most likely the Awaswas clan of Ohlone Costanoan), who managed the land in order to benefit from the bountiful landscape and encourage the proliferation of game.

In 1912, Theodore Hoover (Dean of Engineering at Stanford and brother of President Herbert Hoover) bought a majority of the Waddell Valley from more than a dozen small landowners. Hoover built the “Brown House” in 1913 as a family vacation house (a role it still serves) and named his holdings Rancho del Oso. In 1925 he built a large Spanish-style residence, the “Casa,” for his family across the creek from the Brown House. Although the Casa was destroyed by fire in 1959, several of Theodore Hoover’s heirs still have residences at Rancho del Oso.

California State Parks acquired approximately two-thirds of the original Rancho del Oso land including Waddell Beach, from Hoover’s daughters in 1977. This enabled the completion of the Skyline-to-the-Sea Trail.

In 1985 Hulda Hoover McLean sold her personal residence and its 40-acre lot to the Sempervirens Fund, intent on creating a place to share the wonders of the natural world with others. After some minor renovations, it was passed on to California State Parks for use as the Rancho del Oso Nature and History Center. She was very active in organizing the Waddell Creek Association, which helps support the volunteer and educational programs at Rancho del Oso, and served on its board of directors well into her 90s. She died in 2006 at the age of 100.